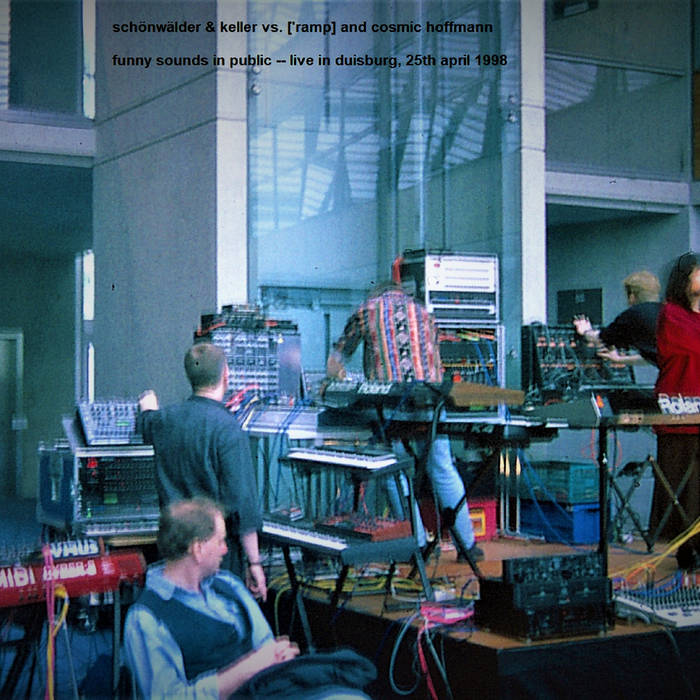 Gedfan A great cause, buy it everyone! it's also excellent!

in early 1998, winfrid trenkler -- host of germany's infamous "schwingungen" radio show -- was planning a little festival in duisburg where some people were to be awarded for their merits in electronic music. he was looking for some musical guests to accompany the ceremony, and the idea was born to have keller & schönwälder (or vice versa), ['ramp], and cosmic hoffmann together on stage to play a couple of impromptu sessions.

alas, the golden rule is "never go on stage without properly rehearsing first" (klaus schulze would probably beg to differ), and -- of course -- there had been no rehearsals prior to the show as we thought we might effortlessly capture some magic right out of the air. well... eventually, the music ended up in a cardboard box full of discarded material. mario had even forgotten that these recordings actually existed.

at some point in 2022, however, the recordings were unearthed from the vaults, and after some minor editing (getting rid of about half the time of the original recordings, nothing to write home about) there was something quite appealing about the music -- there is some classic "nodular" era ['ramp] meeting "loops & beats" era schönwälder & keller (or vice versa), joined by cosmic hoffmann ("beyond the galaxy", as always).

of course, it is far from being perfect, and there are quite a few bum notes (keep them when you find them) but then again, these recordings show the tremendous bit of fun all musicians had on stage. in that respect, it is a rare document of a unique constellation of musical personalities who happened to be in the same place at the same time.

the second set is a little bonus track, especially for frank specht of "rainbow serpent" fame -- he had fallen asleep during the rather soothing first piece, and when the vocalist started screaming at the beginning of the second part, he literally fell off his chair. now, that was a sight to behold...

we hope this little gem will make you all cheer up a little in dire days like these.

all music improvised and performed live in concert by mario schönwälder, detlef keller, ['ramp], and cosmic hoffmann at technologiepark duisburg on 25th april 1998.

produced and prepared for digital download by stephen parsick at dachgeschoss borgholzhausen in january 2022.

thanks to mario schönwälder and detlef keller for their permission to release these recordings from the days of yore.